Olomouc is one of the oldest cities in the Czech Republic and has always been one of the most important. In the Middle Ages, it was the administrative center of Moravia and, after Prague, the second largest city. Over time, it was overtaken by the city of Brno, yet Olomouc is currently an important center of education and history, including cultural, sports and social life. It is also the site of the largest investment project of the state-owned enterprise Povodí Moravy - implementation of stage II.B of flood control measures.
This most expensive and technically most complex stage of the PPO Olomouc will fundamentally change the appearance of the historical city center, when a publicly accessible inlet of up to 12 m wide will be created between Komenský and Masaryk bridges up to Šmeralova Street. This year an attractive stretch of extended berm (SO 02.3) will be opened with elements of naturalization (parallel channel with bays), cycle paths, anchorage for the so-called Ololoď and many relaxation elements (residential staircases, benches, Kavalerist park opposite the left bank). The aim was not only to increase the capacity of the riverbed, but also to make the river accessible to people and create an interesting space for leisure activities. The purpose of the PPO is to increase the capacity of the Morava River in the central part of the city to a level of 650 m3 / s, which corresponds to a 380-year flood.
The total length of stage II.B includes extensive modifications of the bed of Moravia in the length of 1.9 km from the mouth of Central Moravia above the Comenius Bridge. The construction for CZK 655 million (costs of the construction part) is linked to the completed stage I (bypass channel at Plynárny, implementation 2006) and stage II.A (section from the railway line to the bypass channel, implementation 2013). Funding is provided from the subsidy program of the Ministry of Agriculture “Support of flood prevention III” (2014 - 2019). Simultaneously, the Statutory City of Olomouc (related investments of the City) and the Olomouc Region (Comenius Bridge) also contribute to the costs to a lesser extent.
The main works on one of the largest investment projects in the modern history of Olomouc started on 3 April 2018. The contractor managed to reduce the construction time from the original 53 to 48 months and the complete closure of the Comenius Bridge from 20 to 15 months. The construction of Stage II.B of the PPO, despite a large number of unforeseen complications, runs on schedule. AQUATIS a.s. as a designer of partial SO (SO 02 Morava trough, SO 05 Relocation OK4D, SO 07 Sewerage collector D etc.) provides the author supervision together with the GP construction (SWECO Hydroprojekt a.s.) during the implementation. To date, the section near UPOL (SO 02.3) and the Comenius Bridge near Bristol (SO 04), which has been opened since 18.12. 2019. With regard to the safety and fluidity of traffic and the course of the surrounding construction, the bridge has so far been used only by public transport vehicles, IRS and pedestrians.
At present, the construction of Stage II.B is entering its second half and the main works will now be carried out on the Masaryk tram bridge, the driven tunnel for the pantograph D, drilled piles and subsequently on the waterfront wall tiles and the public alluvium itself. After completion of the construction in Komenského Street, the tram bridge on Masarykovo Avenue will be closed from spring 2020. Its construction will take place in half (after provisional relocation of utilities and excluding the passage of trams). The completion of the Masaryk Bridge is expected to be completed by mid-2022. The bridge will undoubtedly become a technical rarity due to its architectural design (DRNH atelier) (the supporting steel structure has been nicknamed the "stingray" since the beginning) and the future dominant of Olomouc.
However, even after the completion of Stage II.B (summer 2022), the city will not be protected from floods. Comprehensive protection of urban areas in the center of Olomouc will ensure the III. stage of the PPO (section of Moravia above the Comenius Bridge), which definitively closes the inundation above the city by a dam and a movable closure, will exclude Central Moravia from the transfer of flood flows. This stage will also be complicated, not only because of its length, but also because of the implementation of the internal water pumping station planned at the confluence of Moravia and Central Moravia. Project preparation of this III. stage of the stage is still in its infancy - the contracting authority SMOl is currently preparing documentation for the architectural competition (note the previous 2 competitions for DUR and DSP were canceled). Poslední IV. Phase PPO (Moravia, r. km 230,728 to 231,934) is currently also in the phase of project preparation (DUR, DSP, DPS) and the project phase for the Povodí Moravy s. p. is being solved by Dopravoprojekt Brno a.s. 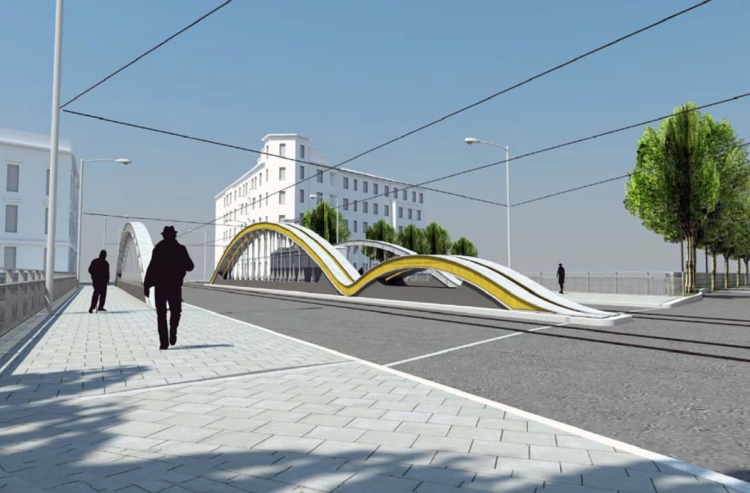